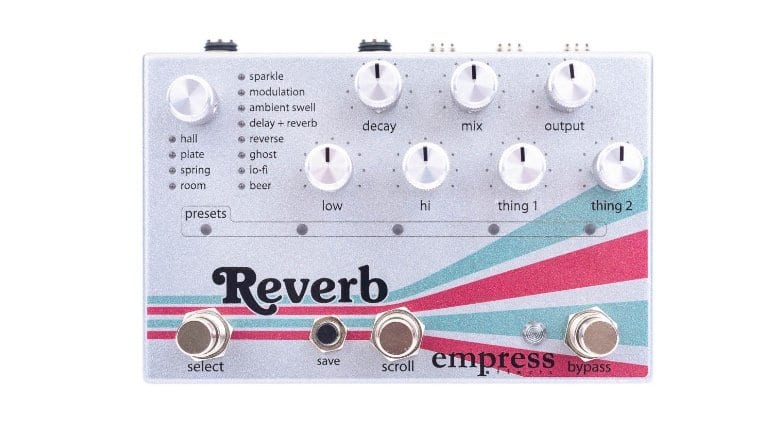 Empress Effects have released the Reverb pedal this month. It features 12 algorithm types and variations, achieving over 24 different reverb effects. Algorithms can be expanded by using an SD card for even more variations when they become available. The aim is to get high quality results with technology crammed into a pedal format.

The company say this compact pedal contains studio quality reverbs which are achieved by using 48kHz sampling, with 24-bit conversion and 32-bit internal processing. The three switches on the front of the pedal are used to switch between the 35 internal presets and the front panel is well laid out and user friendly.

The SD card on the back can be used to add even more reverb algorithms via firmware updates in the future and the unit can also be controlled and accessed using MIDI via the Control Port also on the back panel. You can control patch selection and even use it to select buffered or unbuffered inputs for the presets. It also allows you to use a control voltage, tap tempo or a foot pedal for expression. This one little port does an awful lot!

Compact Reverb with lots of spaces

It’s going to appeal to players that want a lot of high quality reverbs in a small unit. I would imagine that if the firmware updates are frequent enough then it could get a bit of a following from gear heads as well. Empress Effects are letting users request feature updates via their own user forum, so this could grow the feature set rapidly, driven by user input. That’s a great idea.

The pedal itself looks well laid out and the company has a solid reputation for making high-quality effects pedals, so I would imagine this will also be as popular as, say, their Tremolo 2 pedal. As it is such a complex unit in terms of variations, I would highly recommend that you check the specifications on the website. I’ve added just three of the twelve videos below to give you an idea of some of the modes available, including the Beer Mode!

See the Empress Effects site for the Reverb Specifications 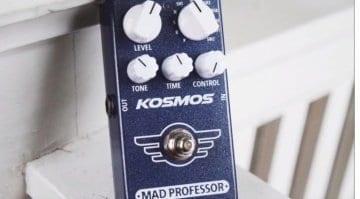