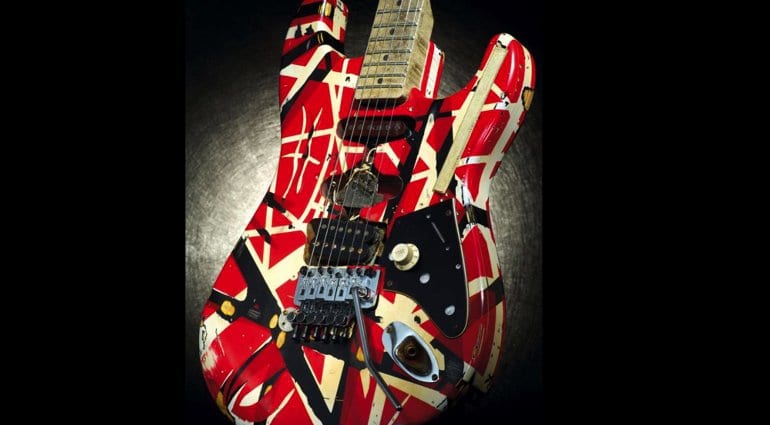 Yes, you read that correctly, someone has stolen Eddie Van Halen’s original iconic striped red and white ‘Frankenstrat’ and it looks like they just walked out with it!

The guitar which Eddie made famous by building himself and playing exclusively on most of Van Halen‘s major hit records, was donated to the Hard Rock Cafe in 2004 and is valued at around $100,000.

Well, some light-fingered punter walked on into the Hard Rock Cafe in downtown San Antonio Friday morning and now they are frantically trying to get information on its whereabouts.

According to the My San Antonio news site –

‘Nobody in the restaurant witnessed the theft, police said. It wasn’t until 1 a.m. that an employee noticed the guitar was missing while closing up shop.’

The guitar is signed by Eddie and so would be almost impossible to pass on or sell, without raising an alarm bells. Of course, if you see it make sure you get in touch with the local authorities.

Fender went to great lengths to replicate the original and sold some seriously limited edition  replicas of the guitar back in 2008 and so it will be easy to spot what the original looks like, as it is so well documented, as guitarists have obsessed over it for so many years and it is a modern day rock and roll icon in its own right.

Update at 11:17 a.m.: Officials with Hard Rock International said the stolen Eddie Van Halen guitar has been safely returned to the restaurant. They are now working with local authorities investigating the incident. 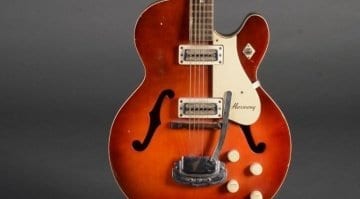 It wasnt the original frankenstrat!! The original is locked away deep within eddies home studio.a copy was stolen/retirned,the original would sell for well over a million! like most instruments displayed at hard rock,it was a copy

If you consider the several D Gilmour guitars sold recently, Ed”s Frankie could be sold more than 10 millions dollars….

Way more than a million. Some other random guitars he simply owned or played on stage were going for several hundred thousand. The original spends its time in a safe under Wolfgang’s control.

When are you people going to fix that headline…do your damn homework.. IT WASN’T THE ORIGINAL!!!!!! The original frankenstrat is in the Smithsonian…

Actually, that is also a copy.

The original is not at the Smithsonian. They have a replica. The original is with Wofgang Van Halen, and it is kept in a safe. According to Wolgang, it’s not going anywhere, and it will not be sold. If it were up for auction, it very likely would go for the highest price ever paid.

You are correct. You can see the original in his music Dont back down. It and all Eddie’s guitars are hanging to the studio.

Don’t compare EVH with David Gilmour.
Shredding like EVH doesn’t mean it sounds better than Gilmour.
The price of the DG’s guitar was more than honorable. And he still alive!
Apart of Eruption or Jump, which other songs did success VH?

What rock do you live under? VH had dozens of great songs!!! I love Pink Floyd but pull your head out of your a**! David G is awesome but so was Eddie. Don’t compare the 2.

If you would not have mentioned Pink Floyd as being the act that Gilmore was associated with,I would not have even known who he even was.The same cannot be said with Eddie Van Halen.If a thousand people on the street were asked who is Eddie Van Halen & who is David Gilmore,all 1000 will know who EVH is & what act he’s in,but only a few will know the same about Gilmore.Eventhough both bands experienced the same level of success, no comparison can exist between EVH vs DG…….

This is definitely a YOU problem.

Gilmore was great. He played some classic and beautiful solos. He was the guitarist for Pink Floyd, a band that sold more albums than Van Halen. His Fender Strat guitar sold for a few million because he played it. Eddie’s original Frankenstein guitar would sell for many million more because Eddie played it, and because he built it, and because he changed the way guitars were played and built. Gilmore’s Stratocaster was not a game-changer in the world of music.

Both are OUTSTANDING guitarists and if either one read these comments, they’d be laughing. I KNOW both had the utmost respect for each other’s UNQUESTIONABLE talent.

DUDE! You’re my hero! How can you post and breathe at the same time? You’re Awesome!

I can think of plenty, panama,hot for teacher, running with the devil,atomic punk, dance the night away,buitiful girls, dead or alive, ain’t Talkin bout love, dreams, you really got me, pound cake, unchained, mean street, everybody wants some, little dreamer, I don’t think your guitar player built his own guitar, sounds, finger tapping, speed picking, and legendary band, pink Floyd is just another brick in the wall.

I have held a replica of Eddie Van Halens guitar. And i wish i was as famous pink Floyd!!!!

Whenever Eddie Van Halen was asked these provocative or pigeon-holed questions does he see his greatness; he was the best of this that or the other.. blah, blah, blah, blah???
What always caught my attention is that he never appeared to let it go to his head. I think it has everything to do with his multicultural upbringing. His mother was from the Dutch Indonesia his dad was from the Netherlands. He and his brother were born in Amsterdam and came over to the U.S. on a cruiseship the family playing music to pay for their passage.
They were dirt poor for most of his early life, but they had a tightly bound and united hime life. These are the reasons that I believe that he always marched to the beat of his own drum and he never tried to compare himsrlf to others. When people figure out that each one of us is great and we don’t need to compare ourselves to anyone only then can we become our greatest and inspire others.

Eddie Van Halen was one of the best in the world

There seems to be alot of passion in people’s opinions. That i beleive is important in developing one’s taste for styles. Just don’t tune out other bands or other genres , just “because they dont have THE BEST GUITARIST or DRUMMER etc. Try to enjoy some of the amazing bands and performers while there still playing gigs and recording . Willie Nelson still plays 150 shows per year, NEVER will another be! Judas Priest w/Halford still hitting those high notes across the globe…Even Aerosmith soldiers on. With recent losses of EVH, Lemmy, Eddie Money, Charlie Watts, Dusty Hill it should be clear we rapidly losing all-time great influencers, not only music but some of our SPIRIT ! Thanks for the GREAT MEMORIES and the SOUNDTRACK of our lives 🙂

I am going to have a priest turn my balls into bread so you can put them in your mouth.

I own the original…. sorry