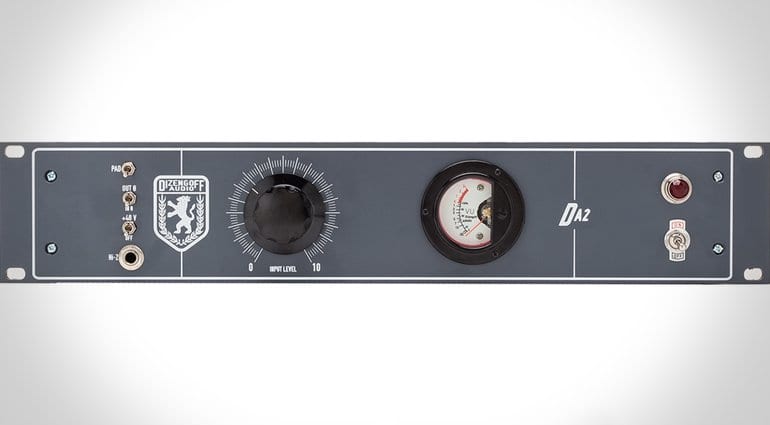 Announced earlier this year, it appears the Dizengoff Audio DA2 pre-amp is now available. Along with the release and after several requests, Dizengoff have now published sound bites – listen below. This is a new design, built on the same concept and with the same valve as found in the RCA BA2C tube pre-amp.

Built in Chicago, and around the RCA BA2C. This is clearly aimed at providing an affordable pre-amp to deliver a sound associated with Nashville in the 50’s. Described as having ‘low-mid wallop’, this should be a rich sounding pre-amp. I expect it will probably be a good match for most modern bright-sounding condenser microphones, or as a characterful Bass DI.

It is constructed in a 2U rack mounted unit, with all the regular functions such as phase invert, -20db pad, phantom power select and gain. Dizengoff have used an efficient Japanese power supply which promises a low noise to signal ratio. With 52db of gain, this isn’t as high as some modern solid state pre-amps, but should be plenty for most applications. At least there’s a sexy analogue VU meter on the front to see how hard your driving the valve, shame there isn’t an output control too.

Information is quite sparse, but check out the DA2 page on the Dizengoff Audio website. Prices here in the UK are an impressive 599 GBP. Not bad for a valve pre-amp made in the US!

Although it’s not a scientific comparison which would be more useful, Dizengoff have released these sound bites so you can at least hear the result of this pre-amp. We have to assume no processing was used in the making of these clips as it doesn’t state this. Either way, they’re quite a good listen. Published on SoundCloud by Dizengoff Audio.