According to Behringer half of the world’s neon gas used in semiconductor production comes from Ukraine and those factories have been shut down.

Behringer has struggled with the global chip shortage caused by Covid, supply chain issues and other factors, and has dozens of synthesizers poised for production that are currently on hold. Over the weekend the company shared information that 50% of the global production of neon gas used in semiconductor production, is manufactured in Ukraine. Those production facilities have been shut down for obvious and understandable reasons and could result in further delays to manufacturing.

Despite Ukraine being a major producer of neon the video linked to by Behringer (above) seems to suggest that while there may be supply problems they are likely to be minor.

Behringer suggested that we all need to take a step back and give our thoughts to the Ukrainian people who are suffering under the Russian invasion. Some things are perhaps more important than the ETA on the latest synthesizer. It’s easy to be critical of Behringer for showing us all these synths and yet not being able to produce them, but I applaud Behringer for pointing out the reality of the situation, keeping us informed and for continuing to employ their engineers to design and develop new products instead of laying them off.

Behringer has also suggested that there may be good news coming from a $20 billion factory that Intel is building in Ohio and that other large companies are investing in new chip plants. These facilities could be easing the shortages by around 2023.

New releases are going to be slow and we’re going to be waiting a while for these Behringer synths. While it may be frustrating it’s a good opportunity to dial down the fervour a little bit and enjoy the gear we have while looking forward to a future of having all the synths.

Meanwhile, maybe some of the cash we’ve saved up for synths could be helping with the humanitarian effort in Ukraine. Donate here.

Note: previous use of an image of a factory was misleading, apologies for that. 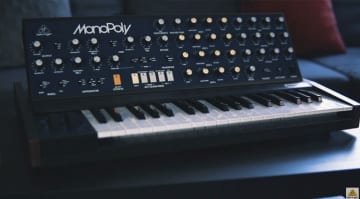