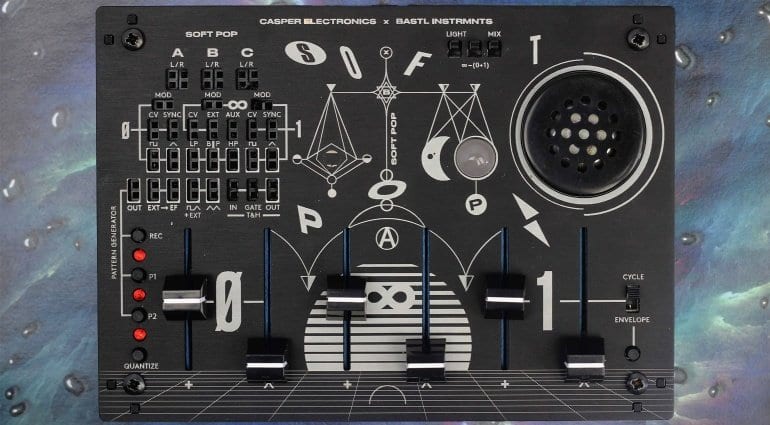 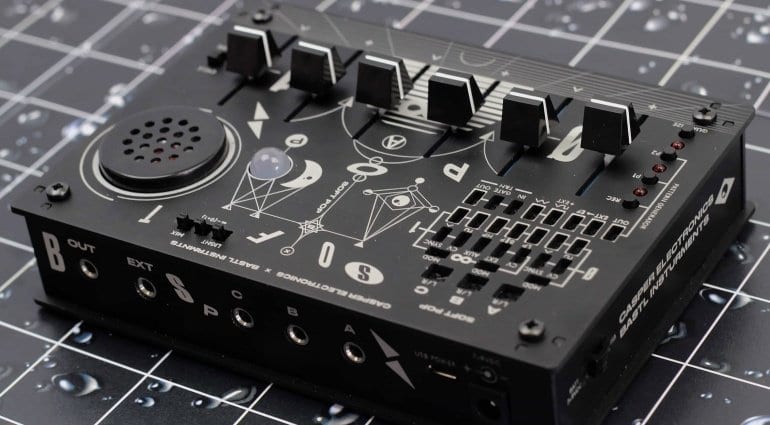 Bastl Instruments’ playful collaboration with Casper Electronics was first previewed at Superbooth. A couple of months later and the softPop semi-modular light and sound synthesizer is almost ready to go and they have started taking preorders.

It’s a funny looking box with unexpected DJ style faders, an obvious speaker and a load of those little mini patchbay slots like you find on the Kastle. The look and style of it radiates something that the black colour doesn’t quite capture. They call it “psychedelic” so you’d think they’d do one in blue or orange at the very least? The case is made from anodised aluminium with laser engraving. This is to give it a bit more rigidity when out in the field.

So what’s the deal with this thing? It has fully analogue core and signal path with two triangle core oscillators, one with an auto-tune quantizer. The 6 faders control the VCO’s the filter and the cross modulation. There’s a track and hold circuit for stepped modulations. A looping pattern generator gives room for banking some of your creativity into the two pattern memories. An external input with gain and envelope follower lets you route other instruments through the filter while the oscillator keeps in sync. There’s a lovely flashing RGB LED, it can take batteries and there’s even a secret chamber for hacking and modding.

Creator of the softPop, Pete Edwards, describes it as follows:

softPop is a psychedelic analogue synth creature with a wet sound and a rowdy spirit.

By the looks of the video, you basically turn it on and start messing with the faders to generate these deliciously wet beeps and noises. The whole lot gets routed back through an “unruly” feedback system creating a sort of playful chaos at every turn. Being semi-modular you can get to work crafting the sound by utilising the mini patchbay. It’s not my favourite sort of interface but very versatile in a small space. It lets you go much further than the 6 faders really let you. You can of course control it via other synths or controllers via CV/Gate. But it’s ability to track incoming audio signals and use them for modulation is much more interesting – or just ram it through the filter. It also has the ability to sync to any rhythmic material being routed through. Pattern creation is simply done by hitting record and moving stuff about.

What I really like about softPop is that it’s not just another mini synth that sits in relative isolation on your desk. It has some well thought out abilities to integrate and mix with other boxes of noise. It understands that people have other synths and wants to play with them as well as being happy on its own. It’s a brilliantly colourful device, although, only on the inside.

Preorders can be placed via the Bastl shop on the noise.kitchen website. The cost is €309 and it should ship in August. More information on the Bastl website.