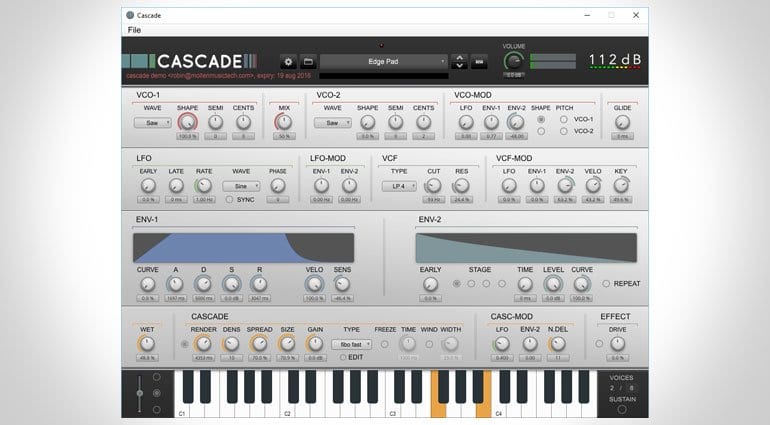 When someone claims to bring in a new form of synthesis I find myself half interested and half ready to dismiss it as the usual bunch of marketing nonsense. 112dB believe they are doing something new with Cascade. Unfortunately, their promo video starts off with a laughably poor rendition of the first few notes from 2001: A Space Odyssey. And it doesn’t get a whole lot better. However, in trying to be objective, so I’ll give the demo a go.

According to the readme file they “hope that you enjoy our revolutionary, world-changing, block-rocking, face-twisting, kneecap-bashing software”. Now that sounds awesome! I wonder if it’s true.

Cascade synthesis is based upon a complex delay network that can “densify” a sound up to 5832 times. This doesn’t necessarily make it sound more dense but apparently adds extra dimensions to it. The Cascade part of the synth is added at the end, so it’s more like an effect than a form of sound generation. I wonder if releasing it as an effect might have made it more interesting. Before that we have two oscillators, an LFO, a filter and two envelopes which are all very familiar.

The Cascade part itself has controls for render size up to 10,000ms, density, stereo spread, size and gain. There’s an option to change the type of delay network model and a feedback section. But what does it all mean? They describe it as the accumulation of an adjustable amount of delayed versions of the original sound – “it’s like a waterfall that comes down and splits on a rock”. Each delay is exponential, the first adding 8 signals, the second 64, the third 512 and so on. The effect is very much like granular synthesis but I’ve yet to fully get a handle on what’s going on.

The Render knob is actually a pre-render control because the nature of this synthesis is that it takes time to build up. The Render knob pre-renders the build up so that you can jump to the more interesting bit. In essence it makes the sound denser or richer. The Density knob then dictates how many delays are present. But don’t think of it in terms of delay like a delay effect, because that’s not what it is.

You have 5 types of delay network models to play with. These give you a range of different delays which alter the character of the sound. You can randomise these or add your own values. Beneath the network is a graphical representation of the density. 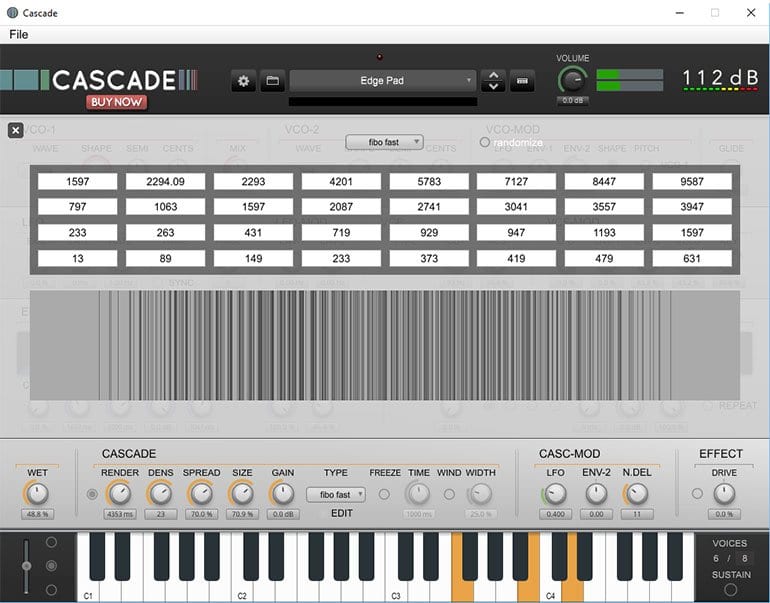 Finally, there’s a freeze function which selects an amount of time to feedback into the sound. The Wind knob doesn’t add expression or wind noise to the signal. It refers to adding a Hanning envelope resulting in less cancellation and more granulation – apparently.

Honestly, I think in order to understand what’s going on and deliberately make sound design choices you’d have to have a degree in some sort of experimental synthesis. This whole project is inspired by an effect created by Wolfgang Musil of the Vienna University of Music and Performing Arts for Austrian composer Peter Ablinger. And it does have a very scientific and experimental feel to it. That’s not to say that synthesis shouldn’t require a bit of thought. Maybe it just needs some better visualization in order to help comprehend what’s going on.

Messing about with the controls can produce some interesting results. I would describe them as being like comb-type filtering, granular graininess, oscillator sync and pulsing sounds. It can get a bit frustrating because it has to build up the sound from the note you’ve played so as you change things you won’t always get that sound again the next time you re-trigger. You also get very little change to fast notes. If you have an arpeggiator going and you play with the knobs very little seems to happen. It’s only when notes are held do you really encounter all the evolution going on.

It’s taken me quite a while to get some satisfying sound generation out of Cascade. The concepts and intentions are good and it’s a worthy investigation into a different form of sound manipulation. It’s not easy to use and doesn’t come with much of a sense of creative fun. However, it has a unique character and is capable of some really interesting sounds if you are prepared to put in the effort.

There’s a 60 day demo available which is really worth the download just to see if this sort of synthesis might be up your street. After that it’s USD $99 for a full license.