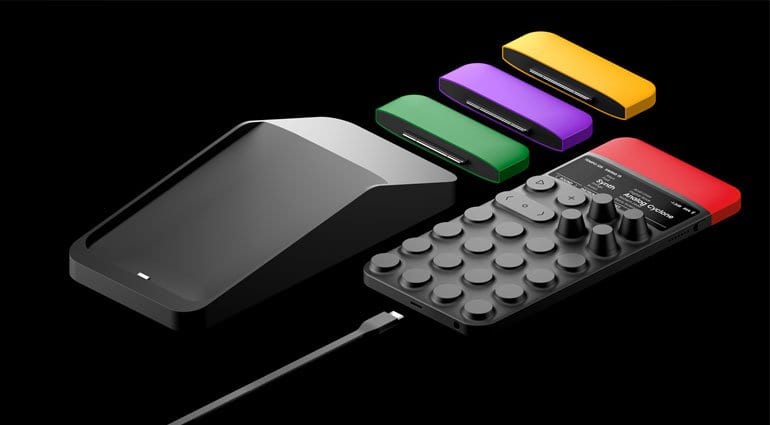 Looking very much like they’ve taken a Teenage Engineering Pocket Operator and encased it in rubber, the Zont Sound Synthesizer is a very strikingly styled box. It’s sleek with smooth lines and those oh-so-touchable buttons rising out of the front. Apparently it can be all sorts of things with interchangeable sound cartridges. Smells a bit like vapourware to me.

We don’t know a whole lot about it beyond the very lovely website but the idea seems to be that these are little music making devices. It was designed by New York based Russian designer Pavel Golovkin who has designed for Celemony and MTV Russia amongst other things. There are 16 back-lit buttons which can act as a running light sequencer or trigger pads. There appear to be four nipple-like knobs – are they for turning? Who can tell? The OLED display looks amazing and displays information on what’s going on. But the key feature they are pushing is the idea of interchangeable cartridges that contain the sound. So you’d get a cartridge for drum sounds, another for leads, another for bass etc. Or perhaps there would signature sound cartridges from producers and artists. Everyone likes to get their sounds from “top producers” these days.

Personally I think the cartridge sound module idea is fundamentally flawed. It’s seems intriguing on first look but then wouldn’t you want to be running all these sorts of sounds together? So you’d need to buy at least two or three of the Zont units anyway – like people do with the Pocket Operators. You’re also buying into a proprietary hardware system that’s going to end up expensive and inconvenient when they could simply inject more sounds over Bluetooth or USB. It’s kinda cute I suppose – modern-retro – but I think it will defeat itself.

There’s one more feature to this box of tricks which is the Studio Dock. This is a slab with the USB cable that apparently gives it RCA, MIDI, minijack and USB3.1 ports. I imagine it also works as a charger. Finally there’s the obligatory iOS and Android app for getting deeper into the parameters.

There’s no doubt it looks amazing and appears to be a well designed system, but there are no sound demos, no videos or anything other than what look like concept renders. It has no price as yet and a release date of “Fall 2017” so this is some seriously early fishing for interest. There’s nothing to suggest that it actually exists at all. I predict that this becomes a Kickstarter product by the end of the year.

More information can be found on the Zont Sound website.