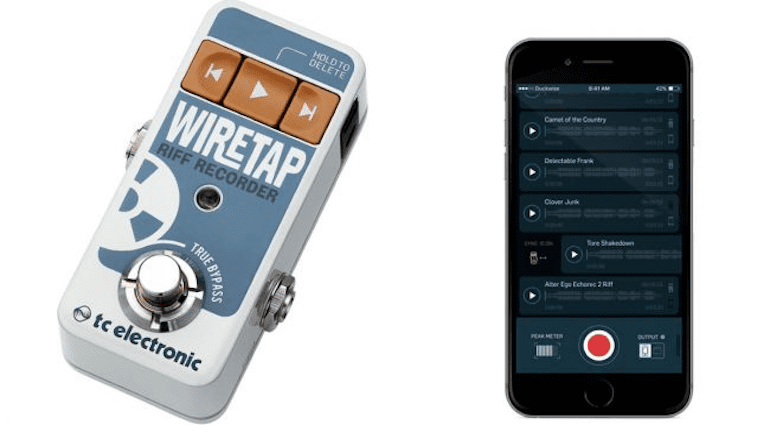 TC Electronics have just announced the WireTap Riff Recorder pedal with matching iOS and Android apps. WireTap is a Bluetooth-enabled pedal that records your riffs and song ideas. The apps allow you to share your musical musings with fellow musicians and build songs together.

Recording in an uncompressed 24-bit, 44.1 kHz quality with up to 8 hours of recording time, it is purely for recording your ideas and unlike the Ditto Looper pedal does not layer the audio. This makes it more of a cousin to TC’s Ditto looper series than a sibling.

The app for WireTap is available for free from the Apple App Store and the Google Play store. The audio can be shared to your smartphone via Bluetooth and from there you can use the app to share ideas with your bandmates. You can also edit audio clips in the app by cutting or trimming them. Tagging names to the clips is also supported, making it easier to find them later.

I think this is a clever use of technology and could be very useful for songwriters on the move, as it is very portable and does not involve complex recording software. The price point looks good which is important as I imagine most players already own an iPhone, iPad or computer to record with, putting this device up against tech many of us already own.

However, if it is simple and quick to use it could be very popular. The free app of course is a major factor in its usability and this will probably be where it will either fly or crash and burn. Of course, we will have to wait and see how it works once they are released.