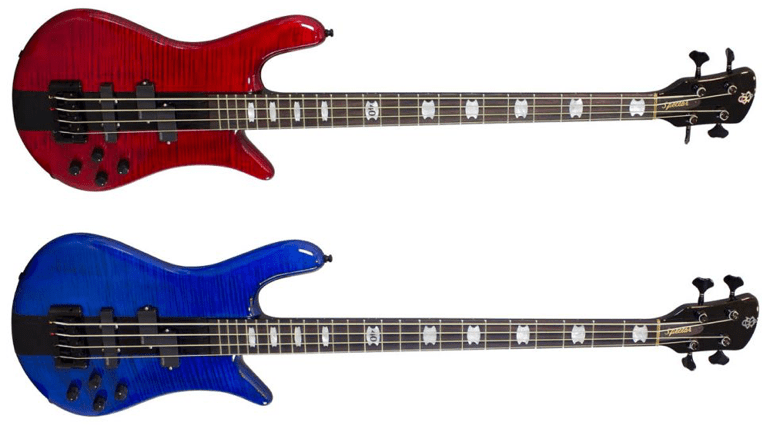 Stuart Spector came up with his handmade Spector bass range in 1976 in his Brooklyn workshop and they have been used by some very famous players over the years. Celebrating those forty years Spector have released a limited edition Euro Bass in a shiny red or blue stain finish for 2016.

Spector basses at one point in the 1980s were everywhere with artists like Sting seen using them and later in the ’90s players like Mike Inez of Alice In Chains. The company have a solid reputation for making quality instruments and doing it by hand. These new Euro Bass anniversary models are available for a limited time. They come in two finishes which are stained onto the maple bodies and then gloss finished to achieve a lustrous deep colour.

The basses are thru neck design and feature a 24″ scale length, 24 fret rosewood neck, which a 40th anniversary fret inlay at the 12th fret position to mark the companies anniversary. The three piece maple necks feature a graphite reinforced truss rod to achieve their strength and which helps keep the necks true.

Spector’s Tone Pump preamp circuit is incorporated into each bass and the pickups are an  EMG J in the bridge and an EMG P in the neck position. The onboard boost offers  + 18dB Bass, + 18dB Treble, so plenty of extra output if and when required.

Modern day Spector basses are but in the Czech Republic and are around a £1000 cheaper on the regular Euro LX-4 model. I cannot find any more information at the time of writing to suggest if the 40th Anniversary Euro Bass is made elsewhere. So I am wondering how the rather large price increase is justified on these models?