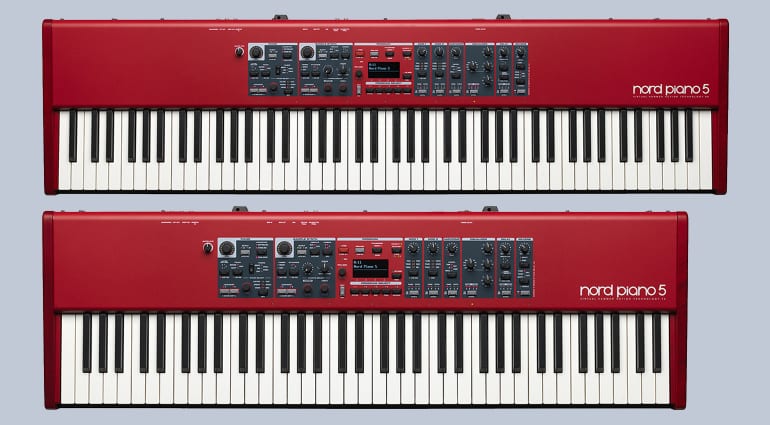 Nord Keyboards has introduced the Nord Piano 5. The new generation brings back the compact 73-key version of the popular stage piano. They’ve also doubled up the piano and sample synth sections for enhanced split/layer combinations, added more memory and made some other improvements. Here’s what’s new.

Three years after the introduction of the previous generation, Nord Keyboards has just announced the latest version of the Nord Piano. And here’s a bit of good news for those of you who prefer a more compact instrument. The Nord Piano 5 is once again available in a 73-key version, which had been axed in the previous generation. Both sizes contain the same hammer action keybed with three sensors per key and Nord’s Virtual Hammer Technology. At 15.5 kg (34.2 lbs), The Nord Piano 5 73 is about 3 kg (6.6 lbs) lighter than the 88-key version.

While the underlying concept remains the same (a combination of Nord’s piano and sample synth engines in one instrument) the Swedish manufacturer has also made some significant upgrades under the hood. Most importantly, both engines are now available in two layers each. This means that you can now create split and layer configurations consisting of two piano sounds or two sample synth sounds, which wasn’t possible before. There’s also an option to create crossfade splits.

The piano section now offers twice the memory for Nord Piano Library samples. Out of the factory, it contains nine grand pianos, nine uprights, ten electric pianos and a bunch of other sounds like clavinet and vibraphone. You also get all the advanced features of the Nord Piano library, including Advanced String Resonance, Soft Release, Dyno Filter and Dynamic Pedal Noise (with Nord Triple Pedal). 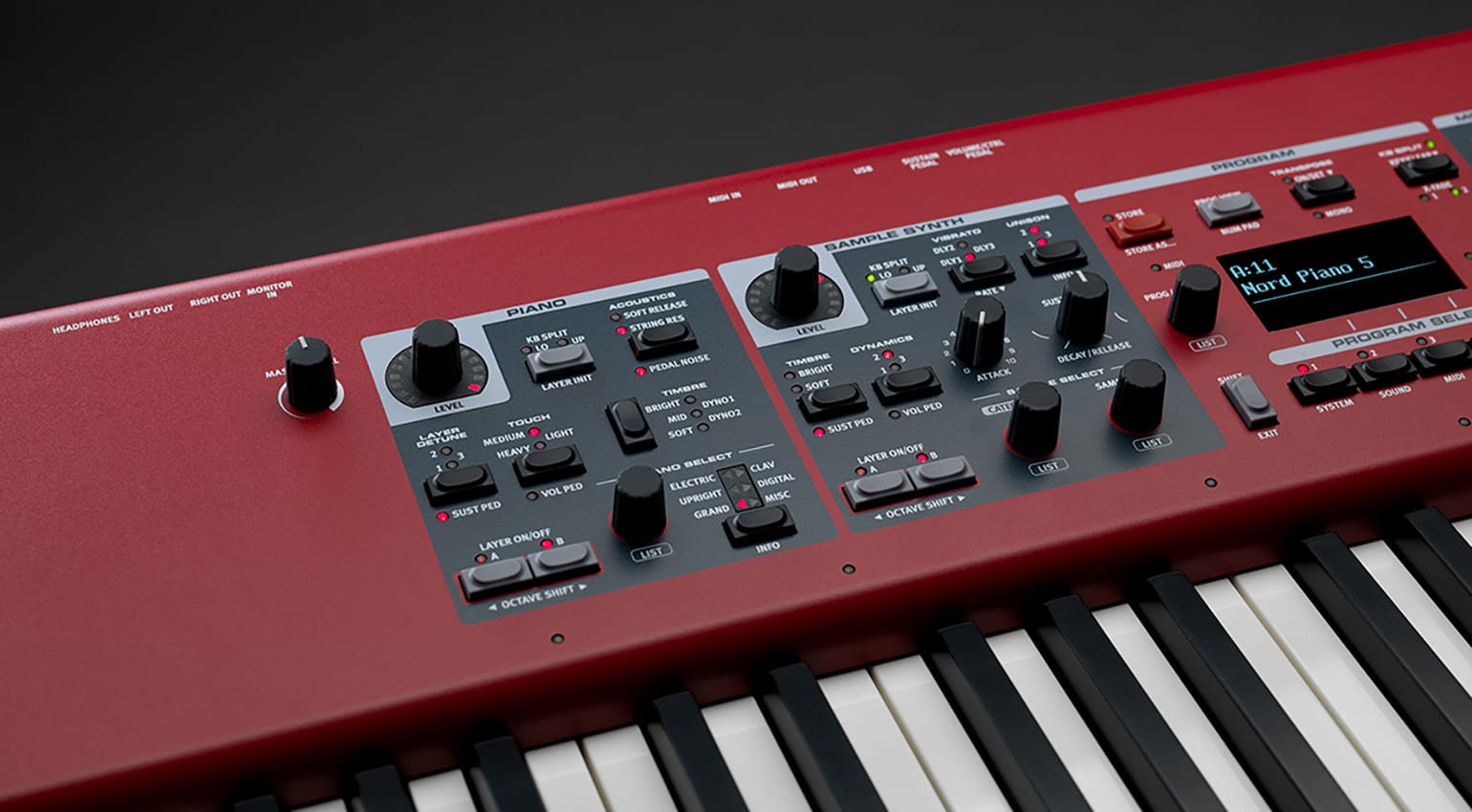 The memory of the sample synth section has also been doubled up. This section has also gained new soft and bright filters, a new Tru Vibrato feature for realistic string and brass sounds, and a unison mode for thick ensemble sounds. 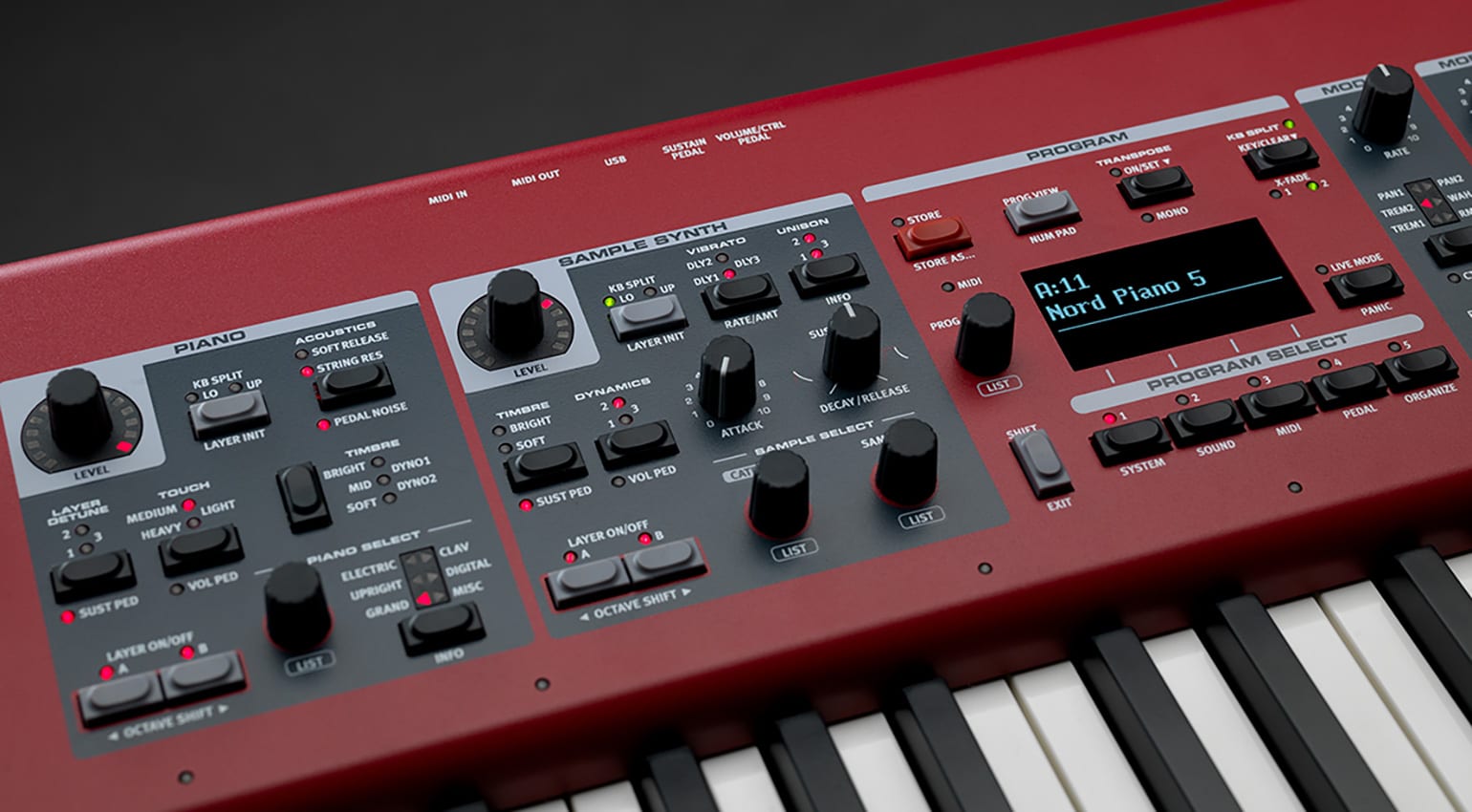 In the effects section, the Nord Piano 5 comes with a couple of new reverbs. The reverb also features new Chorale, bright and dark modes. The delay offers a new ping pong variety. 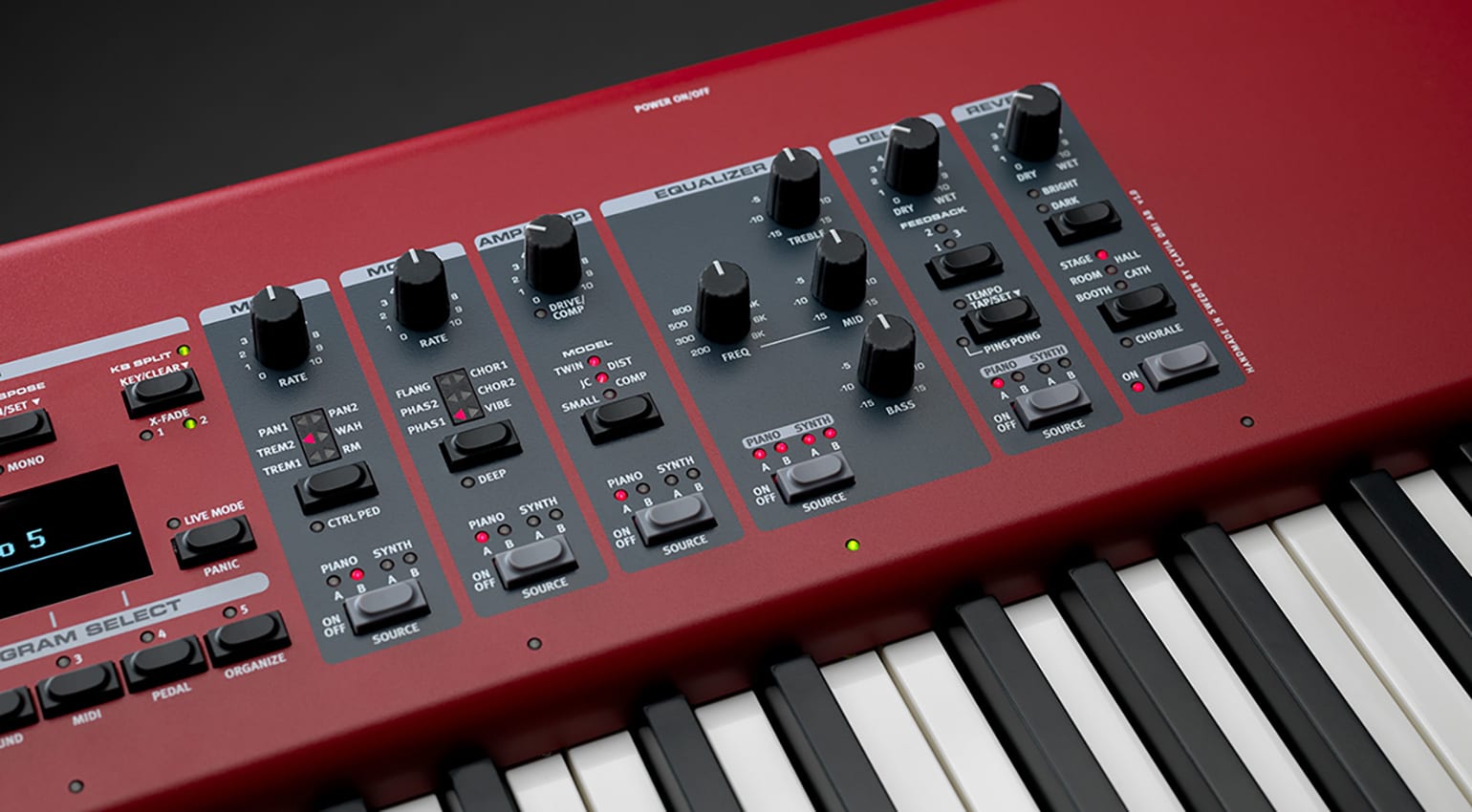 While Nord certainly hasn’t reinvented the wheel with these upgrades, the Nord Piano 5 has gained some essential features that’ll expand the possibilities. More memory is never a bad thing, and the enhanced split and layer capabilities make the stage piano more versatile. Compared to the competition, it remains rather expensive, however. 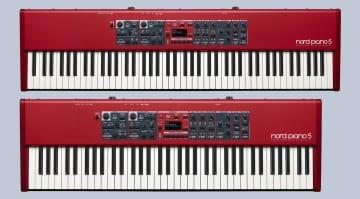 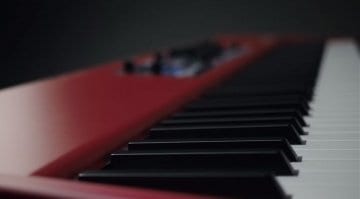 “Twice” the memory?
Twice what exactly?
The Nord Piano 4 had 1GB, but the more recent Nord Grand had 2GB.

So does Nord Piano 5 come with 4GB, which is twice what they’ve offered before… or just 2GB which is twice as much as Nord Piano 4 but basically the same as Nord Grand, and still not very much anyway if you want to load more than a couple of half decent patches.

From the Nord website, it seems like its still 2GB for pianos and now 1GB for the sample synth. I have the Grand and this really doesn’t seem like enough of an upgrade. I guess if you really don’t like the Grand’s shape and/or keybed and want to save some money, this would be a decent alternative.

Don’t see why they can’t just put a 256GB SSD in there. It would cost them about 20 quid extra. Most customers would happily pay more for that. Also, why not make a half rack module version with 256GB. Not everyone wants / needs to swap their entire 88 note keyboard for another new model every year or 18 months just for a minor spec refresh. A half rack £399 Nord Piano module with MIDI, USB and audio I/O would sell like hot cakes surely.

I don’t own a Nord, but you hear it a lot from Nord devotees, that Nord are always way behind with memory size. I’ve played Nord keyboards in music shops and they sound great, feel good to play, but they perhaps need to listen to the customers on the memory issue. 2GB of RAM goes quickly if you’re multisampling at multiple velocities. What Roland tend to do is allocate ALL the RAM to a ‘project’. The project is then stored on SDCard. This method works but has the downside of taking time to switch between projects, something that would need a workaround for a live performance keyboard.