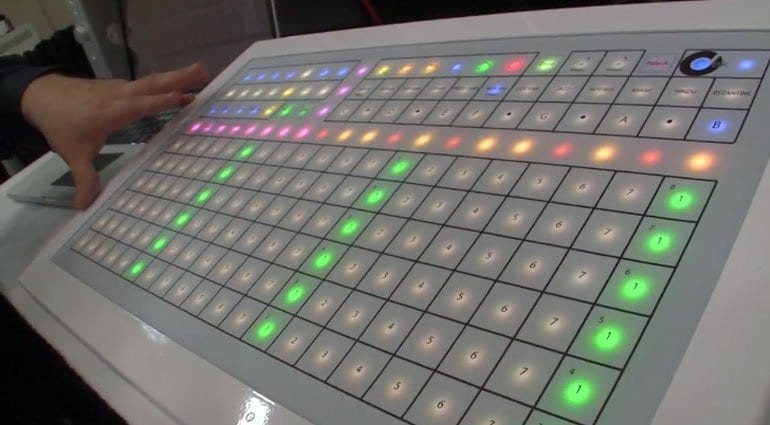 The DEK from Soundwell emerged late last year but is having its first public showing at NAMM. DEK is a grid-based MIDI controller designed to work in musical modes but can be mapped to anything you like.

It claims to be the faster MIDI controller ever created. It works at 2ms with the lights on and 1ms with the lights off. I’m not sure that MIDI latency is that much of “thing” but hooray for speed. It gives it what they call “virtual real-time playability”.

The front end is not made of buttons or pads, they are pressure sensitive sensors and they use a conductive invisible ink to allow the LEDs to shine through the touch layer. The bottom second is your note play area, the top left is the chord play area and the right is the key selection area. Simply select the key and the note play area will play in that key. Or play chords within that key – easy.

Reminds me of that “Theoryboard” scale and chord generator Kickstarter project.

There’s a row of buttons across the middle that can be mapped to anything you like – triggering loops, changing patches etc. And DAW transport controls.

But, it’s also a “smart controller”. In Smart Mode it can detect the key of a song or project you are working on and set the controller to the right key ready for playing. So you could play along to any track, from anywhere, just an audio file. Pretty clever.

The price, however, is currently $2499 – what? That’s completely nuts. I mean it’s nice and everything but gee whiz that’s something else. Apparently, they say they are developing a simpler and cheaper version which they hope will be under $1000. Let’s hope they do that.

I can’t find a website for it, just an entry on Vintage King here. 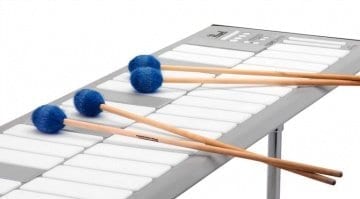 Did I miss something, or this is not MPE compatible? I worry that this is a product that doesn’t have an audience. (It’s priced like cutting edge controllers, but the capabilities seem like they will be more appealing to less experienced folks than the crowd that is interested in controllers in that price range.) Time will tell?

The Dek offers Polyphonic Aftertouch – The Smaller version coming soon will have a selector tab to choice between MPE and Poly Aftertouch.
Automated Key Detection – 200 Translucent FSRs and its incredible play Speed is where this device accells.

But what I’m not hearing is anyone complaining about laggy MIDI. If you connect a MIDI controller to a MIDI sound source there’s no delay. If you are talking about latency from virtual instruments then it’s nothing to do with the trigger speed. Latency in audio systems is not a function of MIDI. So i’m not understanding why you feel the speed is your USP.

Playing it feels much more connected to you as you generate music.
Trigger delay has been a thorn in the side of many midi musicians over the years and improved performance on that front is well appreciated and noticed by everyone whom has played one.

Will the DEK be able to trigger hardware synths ?

Yes it triggers both Hardware and Software Synths. It is equipped with DIN Midi and USB Midi