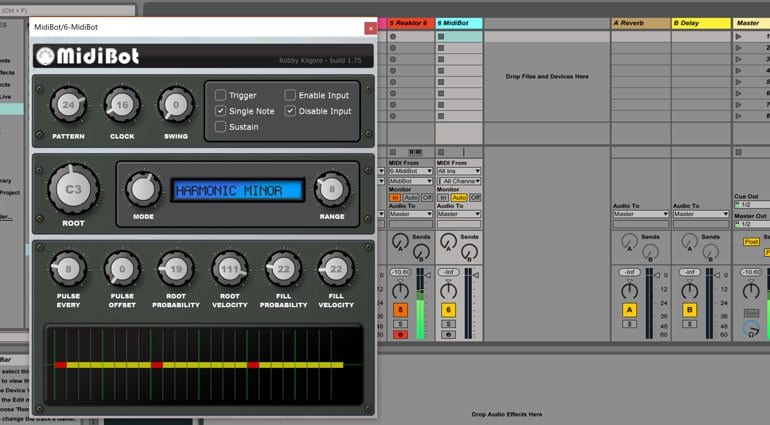 You insert it as a VST instrument and direct it as the MIDI input for the instrument you want to play. Midibot then generates patterns of MIDI based upon probability factors. The pulse generator/sequencer at the bottom kicks out a pulse or note on every red pulse. The yellow pulses are governed by probability. It can be purely rhythmic or you can use the inbuilt scales and modes to generate melodic sequences. It’s like a Eurorack Turing machine with an inbuilt quantizer.

He suggests that it’s perfect for generating percussion with a human feel, or harp and finger-picked melodies. But you could use it to inject a bit of jazz into anything.

Robby says that he created it because he didn’t really jam with real people any more so he “coded a workaround”. That’s kind of sad and adorable in equal measure although I think we all know what he means. Regardless, what it means for us is that we have a really cool new tool for making interesting and realistically played music.

He wants to make it super easy to install and so has dispensed with any complex copy protection. It’s $5 for the zip file and he hopes that people will respect the work he’s put into creating this plug-in and not share it around for free. I hope so too. It’s definitely worth your $5 and if it will encourage Robby to write more plug-ins as useful as this one then that’s a worthwhile investment.