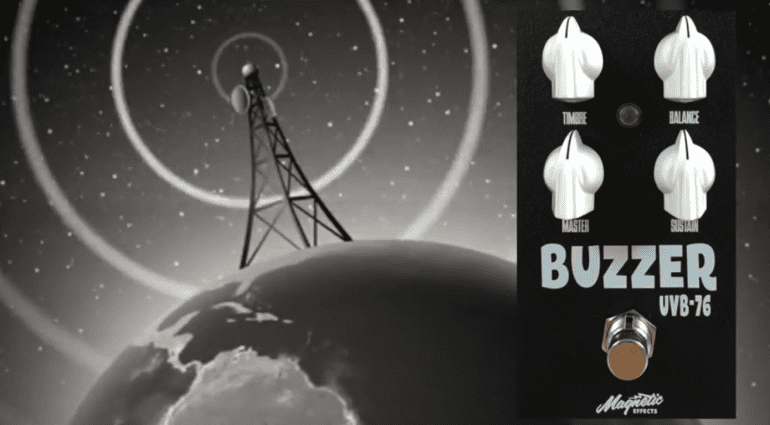 UK-based Magnetic Effects have announced the new Buzzer UVB-76 fuzz pedal. It’s based on the Baldwin Burns Buzzaround fuzz pedal which was famously used by King Crimson’s Robert Fripp. They’ve also added a master volume control and a polarity reverse circuit to bring the design up to modern pedal standards.

In The Court Of The Crimson King

I’m a huge Fripp fan and so when I heard about this new pedal I was pretty excited by the idea of a good quality Buzzaround fuzz pedal. The original Burns pedals change hand for silly money (£1000 plus) and are really hard to get your hands on. Magnetic Effects have a proven track record when it comes to building fuzz pedals and so I am expecting great things from this new release.

Updates for a modern world

The Buzzer has four controls Timbre, Balance, Sustain and Master, each control has an easy to see when on-stage vintage style chicken head knob and they are white, so will stand out easily when you look down at the Buzzer’s black casing. The pedals are all true bypass and have top mounted jacks and DC power input, this makes them nice and pedal-board-friendly as well.

The Master volume allows you to get sounds and tones that the original Burns pedals would have found awkward to achieve, plus the Balance knob acts as a volume / bias control as well. These extra controls should make this pedal quite versatile when compared to the originals.

The original Burns Buzzaround would never have played well with a modern power supply because the circuit’s polarity was around the wrong way (typical of fuzz pedals of this era). Magnetic have used a polarity reversing circuit to avoid the problem.

Check out the video below to get an idea of how the Buzzer UVB 76 sounds. Personally, I think it sounds pretty close to the originals and I welcome the added modern ‘upgrades’, which make it far more useable with a pedal board.