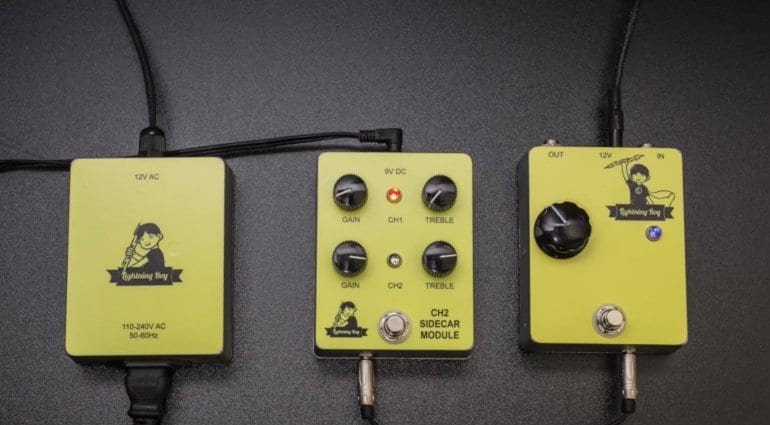 Lightning Boy II modular valve overdrive pedal is a new idea for adding extra gain channels to a traditional pedal. Based in New York, Lightning Boy Audio think they have something that could be cool, expandable and different.

The Lightning Boy II itself is a simple overdrive pedal, with a pre-defined amount of distortion and only one gain knob for boosting the volume by up to 30 dB. The interesting bit is the modular concept, which allows you to link in the CH2 Sidecar Module, in turn adding another channel to the main Lightning Boy II unit. The CH2 also has controls for gain and active treble for both channels. Without the Sidecar, you just get one gain knob on the main Lightning Boy II unit itself. Apparently, though, there are more modules in the pipeline, so this could actually be something intriguingly expandable.

The system is all based around a 12AX7 valve which provides the core tone of the system. Lightning Boy also state that the pedal is designed to accept other valves, if you want to mod it. It’s been tested with the 12AX7 and 12AT7 tubes.

Of course, there’s the usual spiel about it being amp-like, and so on. But the promo video gives you pretty much zero information about the pedal. In fact, it doesn’t even present you with a good reason to go out and buy this system, over and above the drive sound you can hear. It seems a lot of hype with no real content.

That’s a real pity, as the concept is interesting. I would have liked to have seen more details and heard more of the actual drive pedal by itself. I also expected more about the added functionality of the CH2 Sidecar Module. So I’m hoping we get some better demos and more information really soon.

Check out their site for more specific details on the specifications, but don’t expect more than basic information. 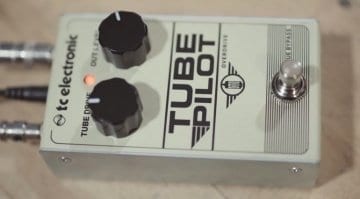