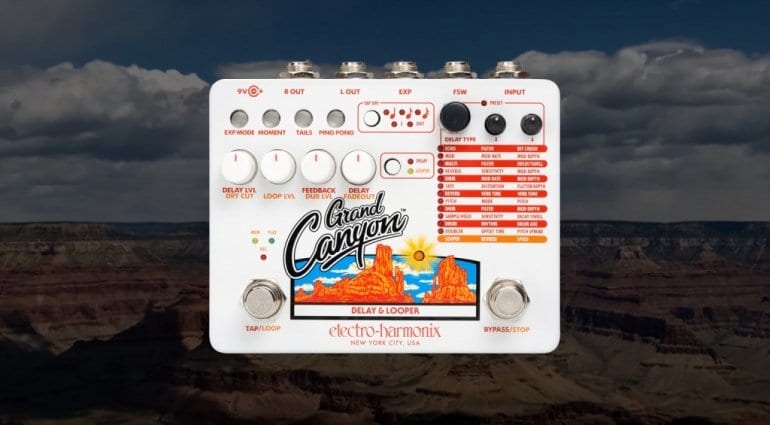 The Grand Canyon is the evolution of the Canyon Delay and not only looks bigger, but also brings a lot more features: Stereo, tap tempo, expression, footswitch, added effects and a full-blown looper.

The original Electro Harmonix Canyon Delay has found a lot of fans (according to the EHX site). The new Grand Canyon is also a delay with Looper function, but there’s a lot more going on here than just a bigger case. There’s a spread of added functions:

In addition to the obvious footswitch for Tap Tempo (which also controls the Looper in secondary mode) there is also a bypass/stop footswitch. The Grand Canyon also adds inputs for an expression pedal, footswitch and a stereo (dual mono) output.

This pedal is controlled by four knobs Delay Level/Dry Cut, Loop Level, Feedback/Dub Level and Delay/Fadeout. Depending on the mode (delay/loop), the corresponding function is active. In addition, Tails, Momentary and Ping-Pong can be activated by pressing a button.

As usual for an EHX pedal, the delay type for the Grand Canyon is selected via an endless dial. 13 presets are available, including Echo, Mod, Multi, Reverse, DMM, Tape, Reverb, Pitch, Shim, Sample/Hold, Drum and Doubler. Each preset can be finely adjusted via two knobs in two parameters. For example, tape still has distortion and flutter, while echo has filters and bit-crushing.

I think Electro Harmonix has really hit the ball out of the park with this new version of the Canyon. For the money, you are getting a lot of useful features that would benefit many pedalboards. Mike Matthews’ pedal company has been making some really great pedals over the last few years, and this looks to be one of them. 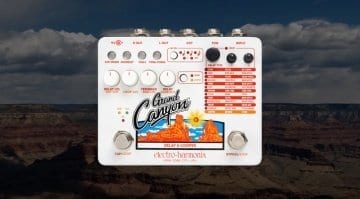 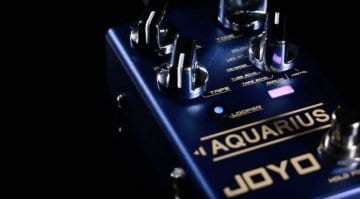 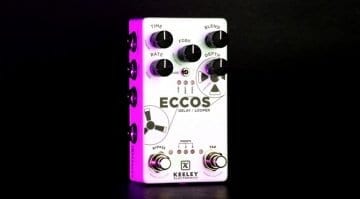