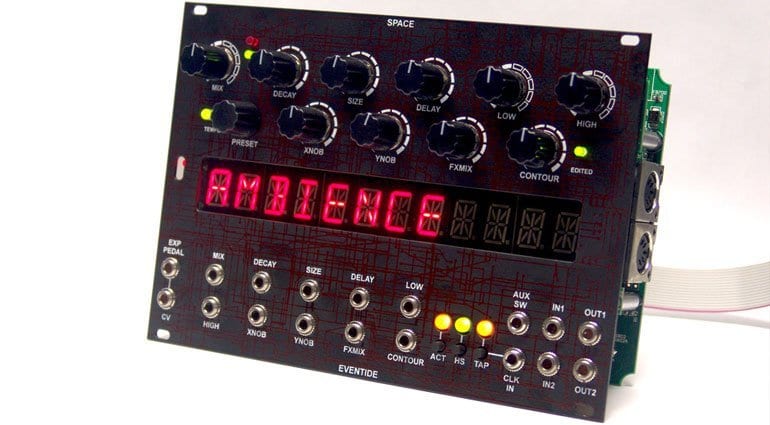 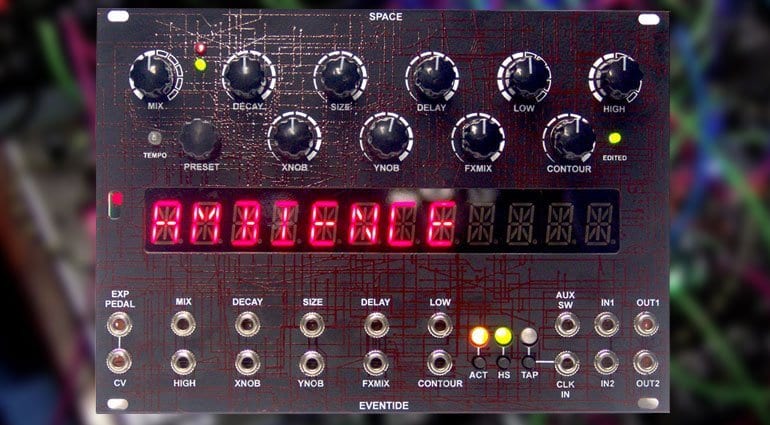 Chris Blarsky from Ninstrument has converted what he calls his favourite pedal into Eurorack. Best known perhaps as a hacker of Gameboys for musical purposes, Ninstrument has done some stunning modular conversions of all sorts of bits of gear. The Eventide Space Eurorack is “one of the more difficult tasks I have accomplished of late” and they’ve just released details on the website.

The Eventide Space is a well-regarded reverb and multi-effects guitar and line pedal. Its usefulness in ambient and electronic music places it in a much wider genre of use than guitar pedals normally find themselves. Released in 2011 the Space is still very much current and is available from most music stores for around £489 – it’s a premium box.

If you don’t know, the Eventide Space pulls in a bunch of 12 reverbs from the Eventide high-end rack processors. There are 10 knobs for full control over the reverb parameters taking you on adventures in space generation. It’s a lot of fun to play with.

So, armed with a sonic screwdriver and lots of determination Ninstruments has folded space and time into Eurorack. Opening it up to CV manipulation has taken Chris about a year, but he says he’s very happy with the result. And so he should be, it looks flippin’ awesome.

I’m loving the look of the new front panel sort of a mixture of technological and post-apocalyptic style. Patch points have been revealed for all 10 knobs giving you complete control. What’s interesting in the video is how the huge LED display fights with itself to display information. With the pedal, you turn the knob and the display shows what’s going on. When controlling multiple things with CV simultaneously the display doesn’t seem to be entirely sure what it’s doing. The MIDI ports still appear to be on the side of the unit – which might clash a bit with other modules, so you’ll have to leave some space if you want to use MIDI. I wonder what other ports it retails from the pedal?

The demo video (below) is a mess of mysteriousness and I look forward to seeing something a bit more contained and controlled just to witness a bit more of this glorious effects unit. Actually, ignore the video and check out the SoundCloud audio examples – they are devastatingly fabulous. Is this the best thing ever? I think I must have one.

Pricing and availability is yet to be announced. For more information keep your eye on Ninstrument’s website.