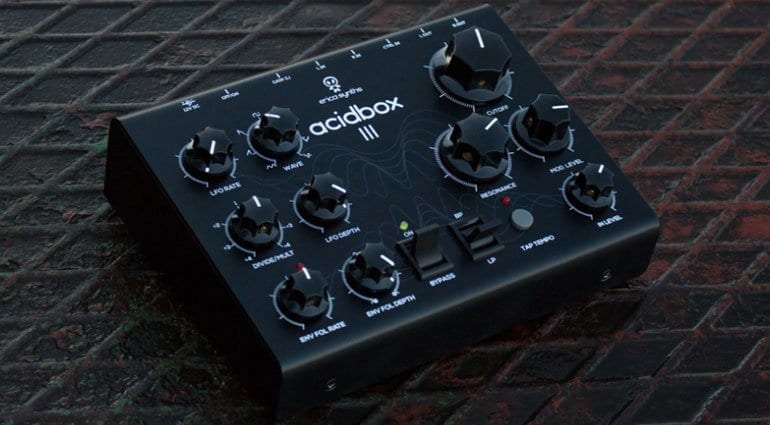 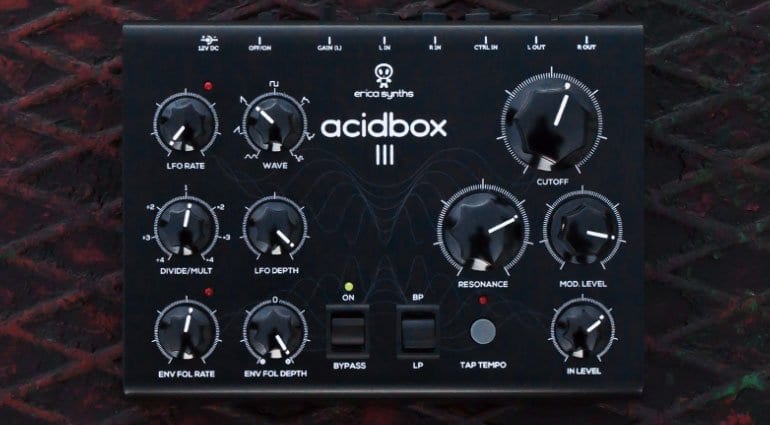 The Acidbox III pulls the Erica Synths Black Polivoks filter out of Eurorack and into a desktop format. Version 2 went out of production quite a while ago and so version III is a very welcome return of the meaty desktop filter – this time in stereo.

The core is a Polivoks stereo lowpass/bandpass VCF made with the original Soviet-era programmable opamps. They have a grit and fierceness to them that makes them extremely good fun to manipulate. And if the regular dirt is not enough then there’s an audio overdrive circuit, hidden behind the “In Level” knob, to push it into some serious distortion.

On the left side of this bulletproof unit is the modulation section. The LFO has 7 waveforms, a rate knob, depth and a Divide/Multi knob which factors out the LFO frequency. This can work well when synced to external drum machines and running at a factor of that tempo. It can all be over-ridden with the Tap Tempo. Beneath the LFO is an Envelope Follower with depth and rate knobs. In the middle there’s the BP/LP filter switch and a “true bypass” bypass.

On the right is all the filtering business. A nicely chunky cut-off knob, resonance, combined modulation level and the aforementioned In Level. You can push it up to self-oscillation for some head-splitting noises.

On the back there’s a controller input that can be configured in a number of ways using the handy configuration knobs on the underside. You can set it up as a single bypass footswitch or for bypass and tap tempo. You can set it to LFO sync, CV input for the cut-off, or combined. Or you can have it set as an expression pedal for working that cut-off in a Hendrix styli.

It’s a solid, blacker than black filter that’s a fabulous addition to any performance setup. It would make a great accompaniment to the Fusion Box.

The Acidbox III is available in a couple of weeks for €390 ex VAT which seems a little expensive considering the Analogue Solutions Mr Hyde is knocking around at £250. Does it have a lot more going on? Probably.