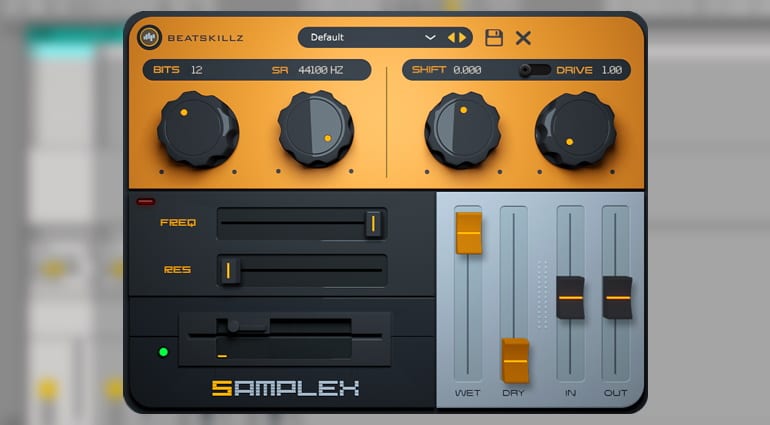 Emulating the sonic character of old samplers is essential for dialing in a nostalgic mood or imparting the crunch and vibe of old AD/DA converters and filters. Throughout the late 80s and early 90s, the sampler was basically your DAW. Computers could only sequence MIDI and maybe do basic audio recording and arranging.

Even if you had Studio Vision, a very capable audio and MIDI sequencer at the time, the sampler – likely an AKAI S series – had most of your sounds and all your sample instruments mapped in its memory. Therefore, it is crucial to the sound quality of 90s electronic and hip-hop records.

Thankfully, you don’t have to wrestle with vintage samplers’ obtuse operating systems, maintenance costs and exorbitant prices (sometimes) to enjoy their sonic goodness. Modern computers are perfectly capable of emulating the sought-after grit and character of these coveted machines. SampleX, developer BeatSkillz’s newest plug-in, makes a case for this. Rather than emulating a specific unit in entirety, though, SampleX models the classic AKAI s900’s input section and the famous Moog ladder filter, then lets you run free with the controls to shape an old-school sound all of your own.

With SampleX, you are able to add as much “drive” as you want, explore the Moog filter’s resonance, create aliasing by reducing bit rate and sampling rate down to 2kHz/4-bit, and blend the processed audio with the dry signal. Having the fundamentals of the old sampler sound locked in, BeatSkillz went on to create presets that are ear-matched to various vintage samplers. You can use these as starting points for tweaking, or any other way you like.

All in all, I like the concept of giving users complete control over a sampler-like audio engine. It sounds more fun than delivering preset models with minimal tweaking potential.

SampleX is available in AU, VST, and AAX formats for Windows and Mac computers. The plug-in is on an introductory sale, priced USD 39 down from the USD 69 regular price. A free trial version is available for both operating systems.