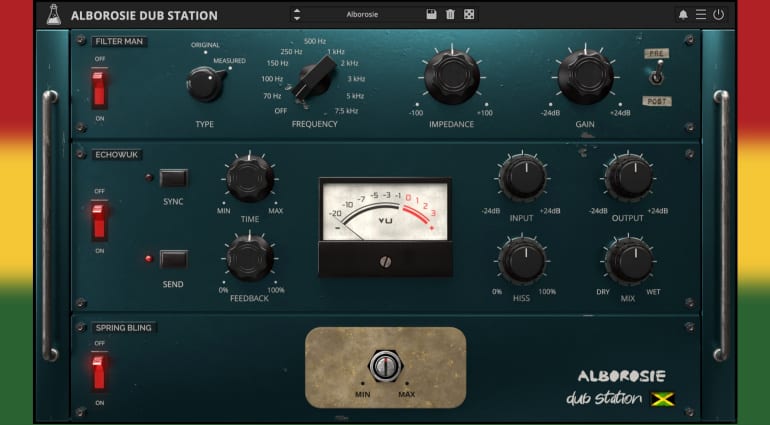 Audiothing throws dub reggae fans a big, fat, juicy bone with the Alborosie Dub Station plug-in. It combines filter, echo, and spring reverb effects meticulously recreated from the vintage gear arsenal of producer King Tubby. As you may know, dub reggae is all about spaced-out, time-stretched, echo-drenched vibes. This plug-in could be an all-in-one dub box, and the real deal at that.

The plug-in features three processors. Filter Man is modeled after the Big Knob – a stepped passive high-pass filter with eleven frequency steps, from 70Hz to 7.5kHz. Coming from an MCI console, it’s considered a legendary analog filter which defined the sound of 1970s dub music, and has also defied replication in hardware or plug-in form until now. It’s a distinctly aggressive, noisy and phasey-sounding filter that might be perfect for tripped-out jams. There are two filter types – Original and Measured – along with Frequency, Impedance, and Gain controls.

Echowuk models an MCI 2-track tape machine which created the echoes and warbles heard on many reggae classics and dub mixes. The machine was sourced straight from King Tubby studio in Waterhouse, Kingston (Jamaica). The effects syncs to DAW tempo and features Time, Feedback, Input, Output, Hiss, and Mix controls.

Spring Bling is a modified Fairchild spring reverb liberally used by the producer to drench his recordings. It only has a Min / Max knob – make what you wish of it.

Other features include a preset manager and parameter randomizer.

Alborosie Dub Station is on an introductory price of EUR 79, down from regular EUR 129. It’s available for macOS 10.7 or later and Windows 7 or later in AU, VST2, VST3, and AAX 64-bit formats. A free demo version and user manual can be downloaded. Both online and offline authorization options are possible.