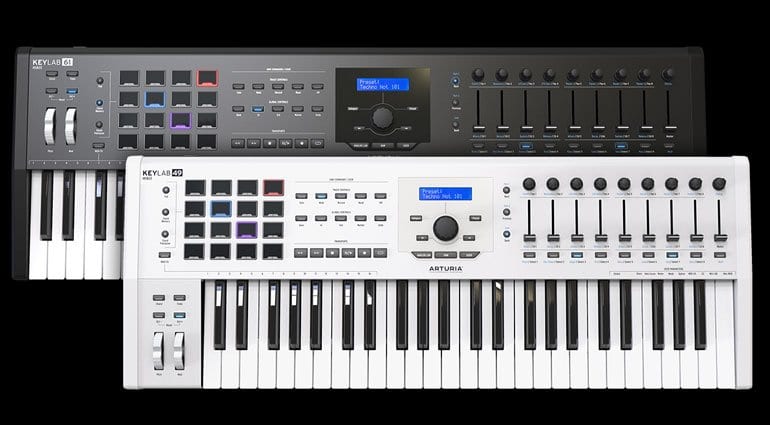 Arturia has announced a pair of really quite sensuous controller keyboards. They say that they used the “Pro-Feel” action keybed of the MatrixBrute which gives a robust but sensitive playing experience. It feels like they’re describing a pack of condoms – “sensitive… delicate… high-impact playing” – ewwww. I’m sure it feels fun to play with whatever your gender.

The KeyLab MkII controller keyboards build on the originals by offering more controls connectivity while completely rearranging the layout. Available in 49 or 61 keyed versions in black or white.

The 16 performance pads are now RGB-backlit and sit on the left rather than the right. The right-hand side has a consolidated DAW controller with 9 faders combined with 9 rotary encoders. Between the two you have some transport controls and selection buttons. Then in the middle is a new jog-knob and display combination with three magic buttons that morph the KeyLab MkII between its three main functions:

There’s Chord Play which enables an intelligent chord generating mode. There’s a handful of modular connections with pitch, gate and two modulation CV outputs and a single CV input. Essentially it acts as MIDI-to-CV converter which is very handy in this day and age of CV everywhere. The pads also have three modes of play. First just pound away at them as regular trigger pads. Or you can use them to trigger up to 16 stored chords. Alternatively, they can transpose chords by triggering different shapes.

They look pretty nice I think. Good bundle of software as well with over 6500 Analog Lab presets, Ableton Live Lite and Piano V. Perhaps the only thing missing is an arpeggiator or sequencer. Otherwise it’s a very versatile and complete controller keyboard in either size or colour. 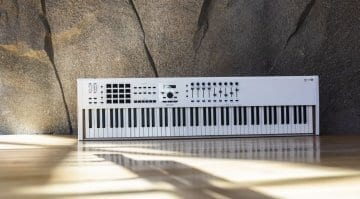