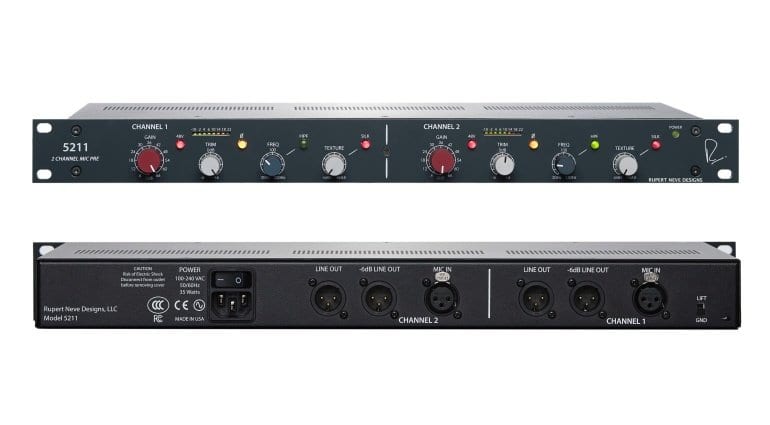 A new Rupert Neve Designs mic pre? I’m totally down for that! The AES goodness has officially begun with the announcement of RND’s 5211 Two Channel Microphone Preamplifier. Each channel has a generous 72dB of gain on tap, enough to cover even notoriously gain-hungry microphones.

There are also sweepable high-pass filters, Silk control for variable output saturation, and the transformers are the same dual-tap traffs used in the mighty RND Shelford Channel strip. They have high headroom and low headroom outputs so you can choose to drive the output stage without clipping your converters, says RND.

The 5211 is the evolution of the 5012 Duo Mic preamp from 2005, with a new Shelford-style faceplate colour, dual-tap output transformers, higher voltage (+/- 21 Volt) rails and an internal auto-switching power supply. RND promises an open and modern sound when disengaging the Silk saturation circuit, and a sound rich in added harmonics when the circuit is active.

The 5211 is simple and elegant, in the manufacturer’s own words, and I find no reason to disagree. The sound is probably spot on, too. Alas, at USD 1995, it’s not a pre which anybody can own. But it’s the price you pay to own a Neve preamp. That’s the way the Earth spins.