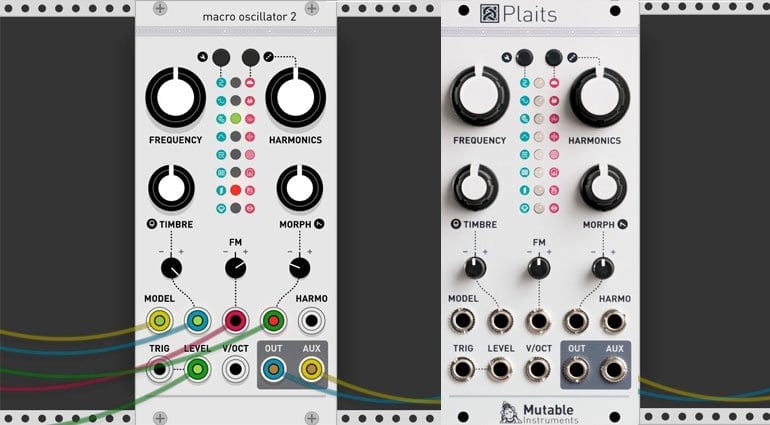 Andrew Belt from the open source software modular system VCV Rack has announced that they are releasing an “Audible Instruments Preview” plug-in. Designed in collaboration with Mutable Instruments it allows you to test out their hardware modules in software form.

Mutable Instruments release the code of their Eurorack modules into the open source community. This is what allows other developers to produce clones and is also how Audible Instruments for VCV Rack is able to exist. VCV Rack has taken the source code and brilliantly replicated the entire range of Mutable Instruments modules in their software. Andrew Belt has stated that he did get permission from Olivier Gillet of Mutable before releasing his work.

It has now emerged that Andrew and Olivier have kindled a closer collaboration which will enable VCV Rack to get access to the source code of future Mutable Instruments modules much sooner. Usually Mutable keep the source code closed until after a second production run, just to make the most of demand and to ensure that dealers are able to sell their stock. VCV Rack will be able to run the code in the Audible Instruments Preview plug-in to enable potential buyers to try the module out before they invest in the hardware. That’s the idea anyway.

The Audible Instruments Preview plug-in is available now for $20 and comes with a port of Plaits, Mutable’s latest multi-oscillator. Andrew says that the $20 charge is really just to limit widespread distribution and 80% of sales are donated to Direct Relief Humanitarian Medical Aid. Once the source code is officially open then Plaits will make it into the regular Audible plug-in collection.

All this raises the good old software versus hardware debate. Does making a module like Plaits available in software undermine the sales of the unit? Or does it, in fact, encourage people into the hardware who may not have thought about it? VCV Rack seems to support both ideas. There are plenty of people celebrating VCV Rack because it allows them to do modular without the cost. While there are plenty of other people citing VCV Rack as a stepping stone to what brought them to hardware. I think the old debate need reframing.

Years ago software was killing hardware without a doubt. These days our approach to gear has changed. There’s an increasing mindset that having “everything” is actually not that good for us. A gazillion software presets perhaps inspires us less than a dozen modules and a handful of patch cables. I believe they can co-exist and that VCV Rack does an amazing job of giving people something approaching a modular experience. I don’t think Mutable will be harming their sales one bit. Like Noise Engineering and their Rack Extensions this is a smart way of using the proliferation of software to demonstrate exactly how awesome hardware could be.