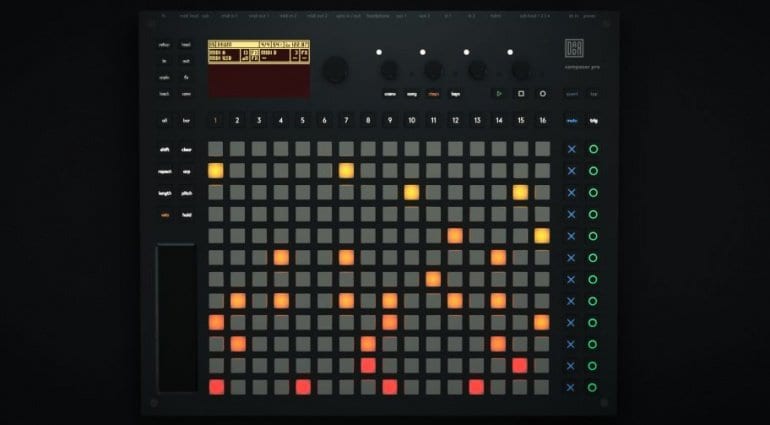 Dadamachines has revealed the Composer Pro, a standalone hardware sequencer with no less than 192 matrix buttons and support for open source audio engines. Just by looking at it, it’s obvious that this is a rather massive performance machine. What can it do? Let’s dig in.

The Dadamachines Composer Pro is designed to be the centerpiece of a live electronic setup. It works without a computer, can serve as a USB host and hub, supports analog and MIDI sync, and  wireless Ableton Link networking. The device is based on a Raspberry Pie 3+ (Quad Core 1.2 / 1GB RAM), two ARM Cortex M4F microcontrollers and a Lattice ICE40UP5K chip. At a price of 1299 Euros, it looks like it could be a serious competitor to machines along the lines of the AKAI Force and Polyend SEQ, among others. And it lets you customize it with open-source content, but more on that in a minute.

A massive grid of songs, machines, and patterns

The Composer Pro can store several songs, each of which contains up to 16 machine slots. A machine is a versatile container that can be a drum sequencer, a melodic sequencer (also polyphonic), a MIDI looper or a MIDI CC sequencer for automating performance controls and parameters. Every machine then offers 12 pattern slots. To give you hands-on control over all of this, the Composer Pro features a whopping 261 RGB buttons, a menu encoder, four parameter encoders and a two-dimensional touch strip. There is also a 128 x 64 pixel OLED display.

The interface offers four view modes for different performance situations. In Song View, you can choose and start songs, and audition projects with Cue Select. Scene View shows all available machines and their patterns and allows you to trigger them. For editing patterns, switch to the Machine View, where the matrix shows the content of a machine’s pattern slot. Then there’s the Performance View, which lets you manipulate pattern parameters such as beat repeats, velocity, note length etc. without changing the original pattern.

In terms of networking, the Composer Pro has everything you’d expect from a machine that wants to be the centerpiece of your live rig. There are stereo inputs and outputs, a headphone jack, and a footswitch jack. Two MIDI inputs and outputs each, DIN sync and analog sync I/O let you connect other gear. The Composer Pro also has an ace up its sleeve with massive USB connectivity. In addition to the USB MIDI port that connects to a computer (if you wish), it can serve as a USB host and 4-port hub. This means that you can connect other USB devices directly to the Composer Pro, without having to go through a computer. Finally, it supports Ableton Link via an external WiFi dongle.

Dadamachines says that the Composer Pro supports open source audio engines. This means that it’s open to all sorts of audio-generating code by 3rd party developers and DIYers. It comes with technobear’s ORAC, and is ready to run instruments and effects created with Pure Data, SuperCollider and others. As always with projects like this, the scope of possibilities is not entirely clear until we see what developers and the user community come up with. But it sounds like it will be vast. I’m all for this kind of open-source thinking, as you can get involved with the inner workings of the machine and music creation on a much deeper level.

Dadamachines plans to have the Composer Pro ready for release by late summer 2019. The company states a price of 1299 Euros. 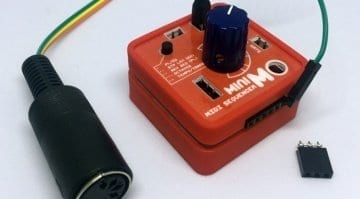