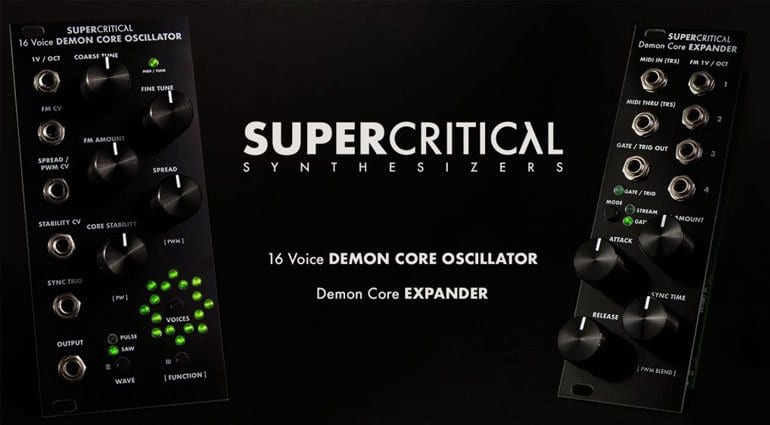 Supercritical Synthesizers has released a few details on their forthcoming Demon Core Oscillator and Expander module. The key feature is the “16 Voices” which is an uncommon thing in the usually monophonic world of Eurorack.

So is it a polyphonic module? Yes, well not exactly, but yes, sort of. As far as I can tell it uses the 16 voices to generate huge unison sounds with the voices stacked on top of one another either at the same pitch or at octaves. You then have controls over oscillator drift, spread and detuning in order to create these massively fat sounds. You can choose between saw and pulse waves with CV controllable pulse width modulation. There’s an FM input with attenuator and a trigger input for synchronising the phases of the waves if that’s what you want.

Check these sounds out.

There’s definitely a lot of regular polyphony going on in there right? It sounds like a polysynth! Well, that’s where the Demon Core Expander comes in.

The Expander brings in all the stuff that should have been there in the first place and catapults this interesting module into a whole other universe of synthesizerness. First of all you get a MIDI input which allows you to play all 16 voices like a polysynth. Now it’s not a full synth voice, there are no filters but each voice does have an envelope attached to it which is controlled on the Expander by a single set of knobs – these work together like a regular synth. So you could then route the single output through a filter in your Eurorack and you have a mixture of polyphonic and paraphonic action going on. For CV polyphony there are 4 FM CV inputs to which you can allocate voices and give yourself a CV controlled 4 part polyphonic voice. That’s very neat. You are definitely going to want to have the Expander.

The video gives a flavour.

There’s a lot more detail about the design and thinking behind the Demon Core Oscillator in this thread on Muff Wiggler. Their own website is not quite ready yet.

This could be one of those game-changing modules that blazes a trail for a different approach to polyphonic Eurorack. 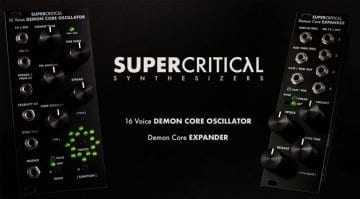